i saw this over at smitten kitchen. i have instantly fallen somersaulted in love with it. i had never heard of monkey bread before. i looked at the pictures and i felt like a kid who found proof santa is real after all. i simply can't understand how this is not something everybody knows about. [insert choice profanity here.] i think we shouldn't be allowed to graduate from childhood without having had a taste of this. 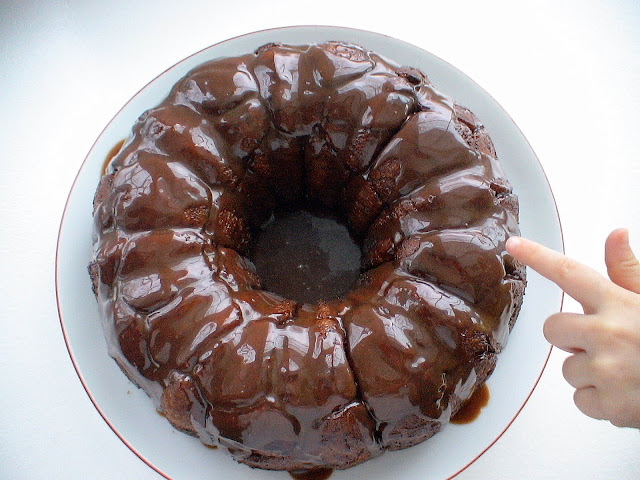 it's the perfect lazy sunday project. the dough needs to rise twice. we had a grand production tea during the first, me drinking my ubiquitous coffee, zhara her juice, and all her dolls were treated to crakers and dried apricots. when it was time to roll the monkey bread, i set up a playdough station for her so she could work, too. she loved that i kept saying monkey bread and demonstrated very noisily what it'd be like if we had an actual monkey in the kitchen.
as it always seems to happen with me, i started gathering my stuff and realized i didn't have enough all-purpose flour. i also didn't have any desire to change my fluffy fleece for freezing sleet, so i replaced half with whole wheat pastry flour. i only had dark brown sugar, and altough the original recipe advised against it, i decided to take my chances. finally, deb did a cream cheese glaze, but we ate the last of our cheese for breakfast, so i had to improvise and did a simple melted chocolate glaze instead. the rest of the recipe is unchanged. 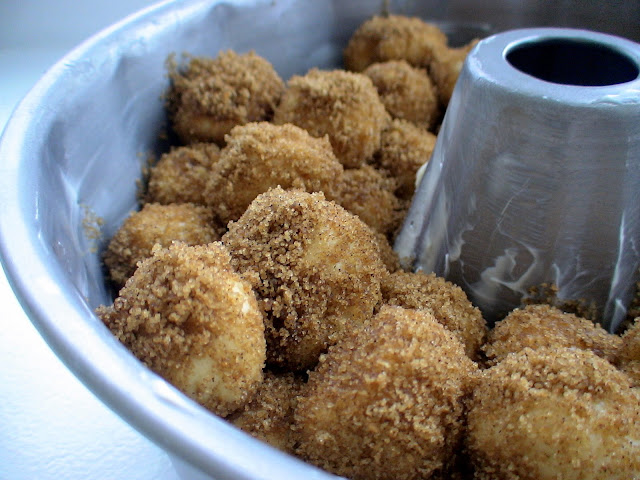 heat oven to 200F/100C. when it's warmed turn it off.
mix flour with salt in the food processor. in a separate bowl, mix milk, water, 2 tb melted butter, sugar and yeast. with the motor running slowly stream in over the flour. if it's too wet sprinkle some 2 tb additional flour, until the dough comes together into a ball, cleaning the sides of the robot. knead 15 seconds then turn into oiled bowl, cover with an oiled wrap and place in the warm oven to rise, about one hour, until doubled in size.
coat a bundt pan with the 2 tb softened butter. set aside. mix brown sugar with cinnamon. melt 8 tb of butter. now flip the dough onto a lightly floured counter and pat into 8 inch square. cut in 64 equal pieces, separating them as soon as they're cut. they'll morph back into a square if you don't. roll each piece to make it round. put each ball through melted butter, then sugar, then place it in the buttered pan. be sure to stagger the balls at the seams where they meet. cover tightly with wrap and put it back in the oven for another 50 to 70 minutes until puffy. 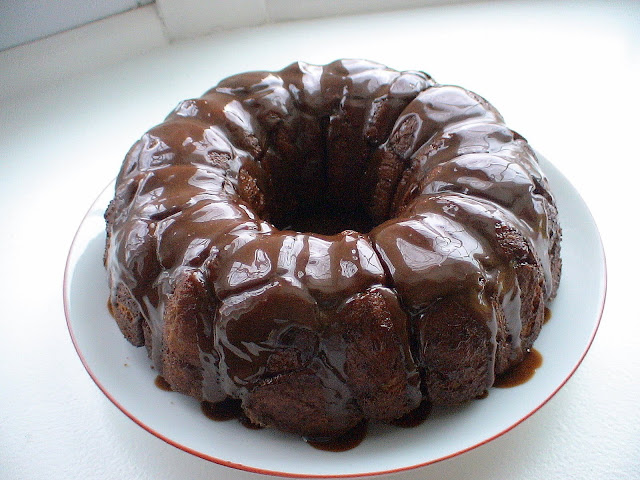 take the pan out and preheat the oven to 350F/177C. bake until the top is deep brown, 30 to 35 minutes. cool in the pan for a couple minutes and invert to a plate - any more and you'll have trouble getting it out. allow to cool for another 10 minutes, then glaze with whatever strikes your fancy. cream cheese is probably a good pairing and i might've tried it had i any cheese... even my chocolate supply was kinda low, so i combined 3 parts butterscotch chips + 1 part white chocolate chips + 1 part bittersweet 70% chocolate. melted those with a glug of milk and poured it all over. i should've probably thought ahead and put it on a rack, but i was already late and it didn't seem like such a big deal that some of it pooled in the inner circle. i ended up piling all of that on the last few pieces. i liked it very much, and i thought the whole wheat imparted a wonderfully subtle nutty background to it. the caramelized exterior would've been enough to convince me, glazed or not. to say it was good would be to trivialize things. so i'm not going to.
Posted by dana at 11:16 PM