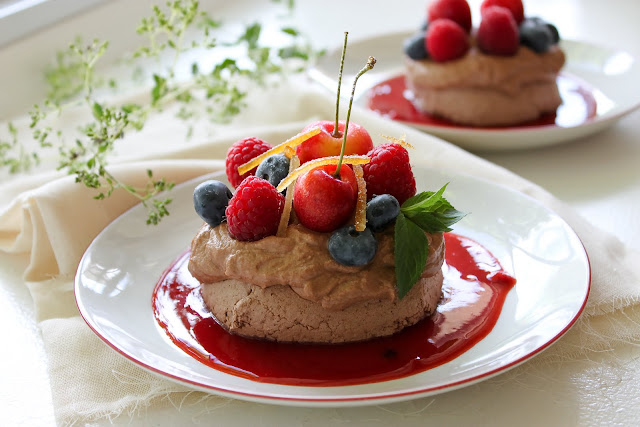 i had long wanted to try a chocolate pav, but as usual i procrastinate until the daring bakers make me do it. only one thing to say about it: if ever i make another pav, it'll be a chocolate one. i find it vastly superior to the original white one. once again, i will not transcribe a long story, when you can see it with a click.

The June 2010 Daring Bakers’ challenge was hosted by Dawn of Doable and Delicious. Dawn challenged the Daring Bakers’ to make Chocolate Pavlovas and Chocolate Mascarpone Mousse. The challenge recipe is based on a recipe from the book Chocolate Epiphany by Francois Payard. 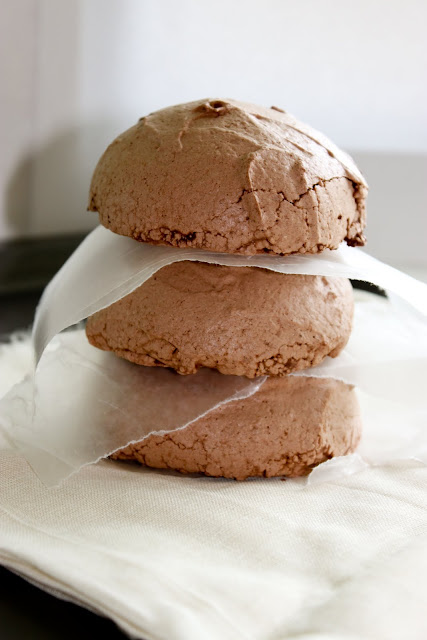 the meringue part of the equation went without a hiccup. easy-peasy. cockyfied by the success, i take on the mascarpone mousse, only to wreck the chocolate. i honestly don't know what i did to it, but it separated and i had to toss the whole lot. this greatly diminished my modest chocolate stash. and obliterated the mascarpone supply. so i set to remake it, this time aiming for half the quantity - and even so i had left-over mousse! i have no clue how high it was expected to be piled on... anyhoo, i used fromage blanc instead of mascarpone, which i made myself, yay, and i'll tell you all about it tomorrow. it worked flawlessly, i think. 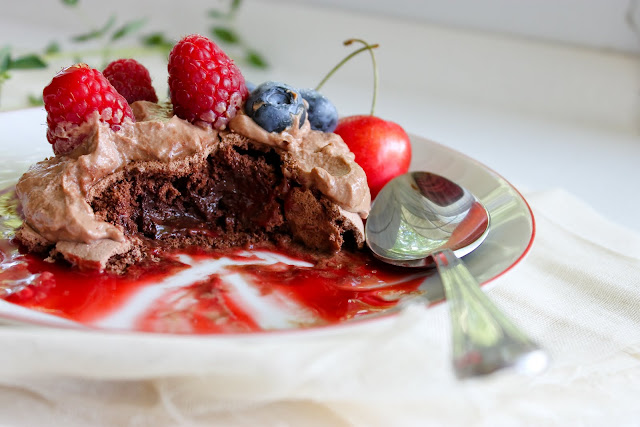 once that was done the mascarpone cream still loomed ahead, and while usually i think anything that lists one recipe creme anglaise as an ingredient is pure evil genius, i simply did not have it in me to add six egg yolks to this dessert. wimp, i know. instead i pooled strawberry coulis underneath. (or, as it was known in its former life, left-over cobbler sauce). to my taste, this was far better than the creme anglaise thing. before you tell me what an arogant prick i am, let me say i know on whose recipe i'm making notes. and i'm not, really - it was just incredibly hot today and the strawberry lent a tart finish that was refreshing, as did the fruit on top.
this was a great challenge. it got me very excited, and even with the mousse fiasco i enjoyed making it. i can't decide if i like the shell or i'm only eating it to get to the fluffy interior, but either way, this is a great recipe to have in my arsenal. and these individual pavs are very elegant, and don't require slicing, which may a considerable plus during a dinner party.
Posted by dana at 10:17 PM