i spotted this idea on miha's wonderful blog with beautiful desserts. 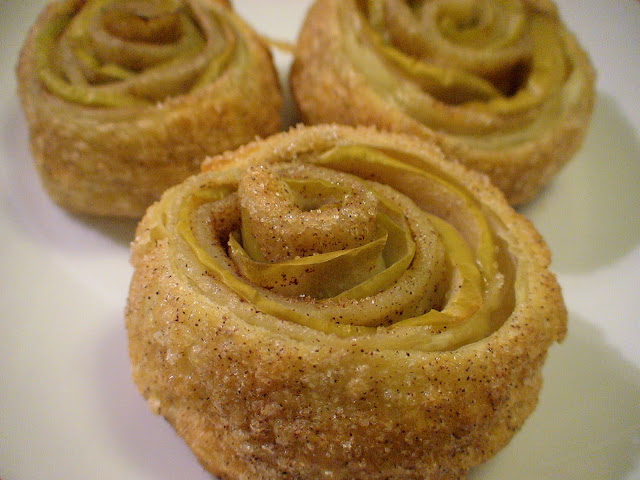 fans of the quick and easy, rejoice. this recipe was created just for us! i love a dessert that's easy and fast to prepare but allows a beautiful presentation. your child will look at you and in her eyes you'll see you're all wrapped up in a golden glow and really you're some kind of super mom, because this is a perfect dessert to make with a child, even an antsy two year old. once you slice the apples there's no more knifes involved. no mixers, no double boilers. zhara had so much fun sprinkling sugar and pressing it in the dough! i brought a chair to the counter for her, gave her plastic cutlery and her own apple, and while i sliced she did too. tzopp! tzopp! (or however i should transliterate the sound she makes when she says chop.) the sugar was the best part. me the control freak found it very difficult to just let her have fun but me the glowy supermom couldn't care less about the sugar contaminating every square inch of my kitchen. we really did make a mess, but we had a significant bonding moment and i wouldn't trade for anything. she is now very interested in cooking and her play kitchen and plastic veggies have been showered with renewed attention ever since.
so all you need is a sheet of puff pastry, two apples, some sugar and a bit of cinnamon. now i made this both with peeled and unpeeled apples. i found that if you leave the peel on it just creates a weird texture, because the peel is tougher and it was pretty much like having a piece of string in your puff. so i'll take the time to peel them. core and thinly slice them. blanch the slices in boiling water in which you've dissolved a bit of sugar and lemon juice, just to soften them and remove to a paper towel to dry.
preheat oven to 400F. add 1 tb cinnamon to 3 to 5 tb sugar and mix well. sprinkle this mixture all over the puff pastry. i like to sugar both sides. press gently to make it adhere. take a pastry cutter or a pizza wheel and cut inch wide strips. place apple slices slightly overlapping them all long the strip then roll it up and place it on a baking sheet lined with parchment. reach under and gently push up while holding the base in place to create some height. secure with a toothpick if you think they might unfold. 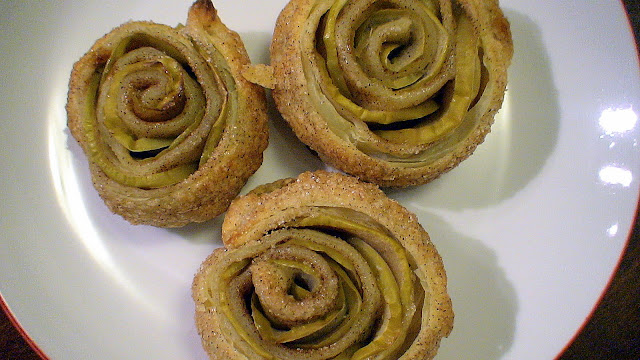 bake for about 15 minutes until they're nicely puffed and golden brown. allow to cool and sprinkle with powdered sugar if you wish.
i like using granny smith for this. a tart apple works best because then you have a bit of contrast with the sweet pastry. also, next time i'll use blond caster sugar. granulated sugar did not caramelize completely, there were still half-melted granules here and there, which is not a bad thing, but it makes me wonder if it can be improved. i find they are perfect on their own. the fist time i made them i did the powdered sugar on top and served them with warm caramel sauce but it was all so unnecessary.
when we had to go to the pediatrician's on a sunday i took some of these along. the nurse, who is very competent and generally nice -except for her tendency to ma'am people without cause- gave me the warmest smile ever. and she called me by name the next time we were in.

ps: you can't tell, but they have a wonderful color. that second picture has a greyish tinge because it gets dark at five. because it's still winter. because spring is nowhere to be seen in the near future. what's cabin fever?
Posted by dana at 3:19 PM